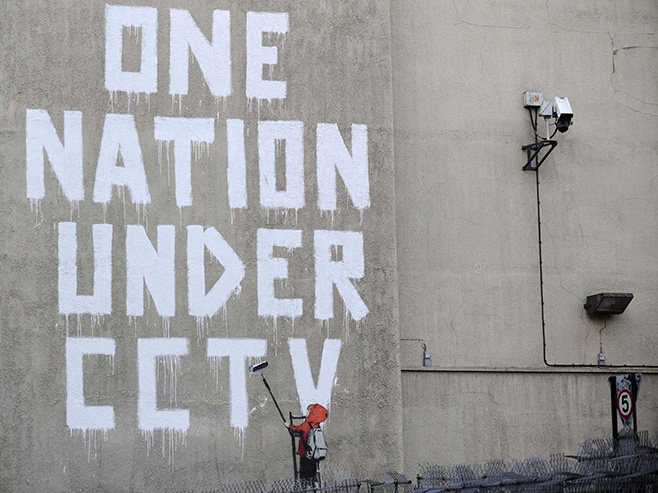 Bansky, ‘One nation under CCTV’, 2008. Courtesy of Daily Mail

Heard of the ‘Quantified Self’ movement? With the tag-line ‘self knowledge through numbers’, its thousands of followers in 34 countries digitally track and share their heart rates, skin temperatures and calorie intakes; how many steps they take, their sleep patterns, routes and moods. But how do you quantify a mood? Think of Sesame Street’s Count von Count: quantifying sets the mood.

Count von Count is the epitome of our current moment: a vampire, laughing madly and pacing the halls of an empty castle lit by lightning, insatiably thirsty for numbers. And, like Sesame Street, quantifying your life – now vampiric in the wake of intelligence organizations and internet companies tracking billions of people’s online behaviour – was a progressive educational invention of the late 1960s. Kevin Kelly – one of the two wired editors who in 2007 coined the term ‘Quantified Self’– began his career as an editor ofThe Whole Earth Catalog (1968–72). This famous hippie publication, hailed by Steve Jobs as ‘Google in paperback form’, was a compendium of counter-cultural knowledge ranging from alternative gardening to cybernetics. In art, Pop and minimalism embraced serialization, whether it involved stacks of boxes (Donald Judd) or rows of soup cans (Andy Warhol), while conceptual artists kept track of what they did with photographs and notes (Douglas Huebler, Adrian Piper), or recorded the length and number of their steps (Stanley Brouwn; see Oscar van den Boogaard’s essay in this issue). Quantification released the burden of the psyche – that thing which scientists, doctors, teachers, gurus and parents had attempted to knead like dough and which art historians had described as the site of genius; the place where the traumas of violence, discrimination and shame were registered. Quantification meant resisting what Richard Sennett in 1976 had termed the ‘terror of intimacy’. Counting your steps meant not having to reveal your private thoughts.

Now, it’s the opposite: everything you search for is hoarded into Big Data, sorted through by corporate and government bodies using sophisticated algorithms, in order to assess what kind of person (or consumer) you are, so as to predict what you’ll do (or buy) next. What was emancipatory has become oppressive. Sure, there are positives, from the prevention of pandemics to avoiding traffic accidents – but in the current moment these are dwarfed by the negatives. Anxious attempts to keep up with an increasingly accelerated online social life are coupled with fantasies of control and superiority, detached from empathy and shame. As comedian Louis C.K. put it in a recent episode of Conan O’Brien’s Tonight Show: ‘Kids are mean, and that’s because they are trying it out. They look at another kid and go “You’re fat”, and then they see the kid’s face crunch up, and go “Ooh, that doesn’t feel good”. But when [he makes the gestures of typing into a smartphone] ‘they write “You’re fat”, then they just go [strokes his belly, as if after a good meal], “Mmh, that was fun, I liked that.”’ Now this is true for a lot of grown-ups too, not least those – like your average geeks at the NSA or the GCHQ – who never run the risk of being uncovered as they filter through private information. Before this kind of remote access was established, a Peeping Tom crouching outside a window could easily be exposed; the cleaning lady, dusting a diplomat’s office, worried about being revealed as a spook.

Not that Philip K. Dick fans didn’t see it coming: in his short stories and novels – the first of which were published in the mid-1950s during the McCarthy witch-hunts – the great sci-fi writer predicted with uncanny prescience many of the phenomena that have become part of today’s reality (see Andrew Hultkrans’s article on Dick in this issue). But with the exception of artists like Trevor Paglen or documentary filmmakers like Laura Poitras (who have contributed to our survey about the response of art to Big Data and surveillance), most people involved in cultural production are only now waking up to the implications of digital surveillance.

When the first NSA leaks were published by the Guardian on 6 June 2013, the international art set was on its way from Venice to Basel. Some small talk ensued, but nothing much happened. Hollywood, on the other hand, responded in October with a campaign video entitled Stop Watching Us, including statements from John Cusack, Maggie Gyllenhaal and Oliver Stone. In the literary world, German writers started a protest campaign and, in November, pen ran a survey which revealed that, as a direct result of the NSA surveillance, 24 percent of American writers had deliberately avoided certain topics in phone or email conversations and 16 percent had refrained from conducting online searches that could be deemed suspicious. So a substantial number of the participants had a taste of what it was it was like to live in a surveillance-happy, but pronouncedly autocratic state like Russia or China.

Why the art world’s reluctance to respond? It could have something to do with what NYU professor of journalism Jay Rosen described as the ‘Toobin principle’. In a CNN live debate last summer, New Yorker writer Jeffrey Toobin was dumbfounded when challenged about how he could both welcome the public debate on state surveillance, yet believe that the person who started it – Edward Snowden – should be thrown in jail. For Rosen, Toobin’s attitude was a symptom of repression. If you have internalized that the public is not entitled to know about or discuss the legitimacy of surveillance, then you have to ‘repress your decision to take such a drastic step because it’s too much to face’ (Rosen).

In the art world, the ‘Toobin principle’ seems alive and well – but inverted. A lot of people admire Snowden, while side-stepping the debate. Why? The art world is arguably the most international, least language-barrier-defined part of the cultural industry, thriving on collaborations reaching around the planet. Perhaps we can’t admit to ourselves how dependent we are on Google and Apple and Facebook – companies compromised by their own data-thirst, and their servers being tapped by the NSA – as everyday tools of cultural production. Also, it’s possible we may have an unacknowledged belief that the secret services, in a Homelandkind of way, will do the dirty job of keeping the warlords and terrorists at bay so the cultural metropoles will run smoothly. Admiring whistleblowers and dissidents who risk their wellbeing, if not their lives, can be a way of not having to admit hoping that the dirty jobs are being done; that despite our sophistication we remain vulnerable, mortal bags of bones (Count von Count has counted them: 206).

Thanks to the diversions of digital devices (or shiny art objects), ‘you never feel completely sad or completely happy’, as Louis C.K. put it, ‘you just feel kind of satisfied with your products [...] and then you die’. At the risk of sounding dramatic, before we do, let’s start reclaiming the data and the algorithms and the gadgetry from those who wish to turn them into means of undermining the fundamental rights of privacy and free expression.

Jörg Heiser is co-editor of frieze magazine, writes for the national daily Süddeutsche Zeitung, and is a frequent contributor to art catalogues and publications. He curated the exhibitions “Romantic Conceptualism” (2007, Kunsthalle Nürnberg, BAWAG Foundation Vienna) and “Funky Lessons” (2004/2005, BüroFriedrich Berlin, BAWAG Foundation Vienna). He is the author of All of a Sudden: Things that Matter in Contemporary Art (Sternberg Press, Berlin and New York, 2008).