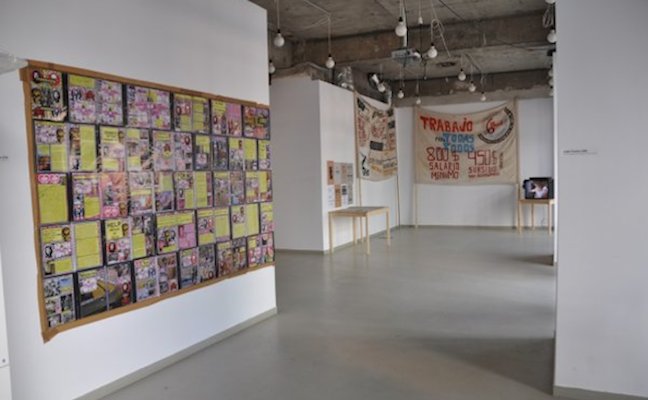 The term “repression” is referring to the act of obstructing certain informational contents outside the consciousness that are connected to cathexis through a pulsion. In other words, repression is the scream of the interior to the exterior, and its pulsion can appear through repression: the events, the life experiences are no longer lived up to the end. No matter what the nature of the outbursts may be – religious, political, ethnic, sexual, etc. –; the repression is a gloomy by-product of the conscience. The myth of the eternal return to nihilism and putrid becomes adequate. I shall use here the derived term “repression”, meaning violent suppression of an opposition movement or rebellion.

“The return of the repressed” is a crucial theme, a key to understanding recent history. “The project of the West, the Nietzschean project, has been to drive out religion and to produce a secular society in which men and women make their own values, because morality is gone”, writes Hanif Kureishi, British writer of Pakistani descent. “Then suddenly radical religion returns from the Third World. How can you not laugh at that? How can you not find that a deep historical irony?”

Death of the religion, as suggested at the end of the 19th century, and the building of an entirely man-made world, with perennial values – namely, a world lacking transcendentality –, is mocked by the emergence of the new nations from under the shadow of the totalitarian terror (that they embraced themselves!), as these nations suggest a moral order based on… religion.

The very act of entering the civilized society entails the repression of the various archaic, primitive desires. For Freud repression is a normal part of human development; indeed, the analysis of dreams, literature, jokes, and “Freudian slips” illustrates the ways that our secret desires continue to find outlet in perfectly well-adjusted individuals. However, when we are faced with obstacles to satisfaction of our libido’s cathexis (the acute need to express, the libidinal energy), when we experience traumatic events, or when we remain stuck on earlier phases of our development, the conflict between the libido and the ego (or between the ego and the superego) can lead to alternative sexual or social discharges.

As for Freud repression is a normal constituent, repression as suppression is a constituent that is generally accepted – and sometimes asked for – by a society that has become seduced by its own non-values, by its own aberrant creations; these creations replace the free thinking with a consumerist/mimetic thinking, with no rebellious impulses and no real values. Today, for the first time, we might witness the awakening of a type of conscience that has been kept too long under the anaesthesia of the neoliberal capitalism, which is now on the brink of collapse or, at least, it is strongly shattered, both pragmatically and ideologically. On the other hand, the societal frustrations – as it is the case in Romania – are replicated in various types of frustrations, including the sexual ones; the social and political movements are actually nonexistent, and the (almost) public violence of the heteronormativity, the lack of reaction from a queer-like movement, the absence of strong workers’ unions and the nonappearance of the civil society can also be relevant for the dispute.

The return of the repressed is the process whereby repressed elements, preserved in the unconscious, tend to reappear, in consciousness or in behavior, in the shape of secondary and more or less unrecognizable “derivatives of the unconscious.” This return of the repressed, of ideologies forced to marginalization, of sexuality subject to forced secrecy, has resulted, in recent years, in an almost dramatic change of a society filled with anguish, hallucinations, repression imposed by unnecessary regulations that serve to the repressive violence of governments against their own citizens.

Nevertheless, the citizens of the government (Take notice of my deliberate use of the inversion of terms) have started to learn. Thus, they learn how to make T-shirts – the body as an external support for the repressed repression –, to write banners, to use the bullhorn, to be vocal and to return to the classical method of protest, which seems to be more effective than the lobbying. The cultural acts, art, literature, dance return as vocal tools of protest, in a more radical manner than in the ‘70s; they question the executive power, and they become the subject of unprecedented reprisals. Society hears about exhibitions that have been closed by the authorities in San Francisco or in Pristina, about curators or art centre directors that have been fired for their courageous display of certain exhibitions with a radical political discourse.

Here the idea of learning means mainly a radical transformation of the self, where the human identity is not a stagnant one and the knowledge is uncertain, but both are the subject of the reevaluation and constant change. As it is suggested by Nietzsche’s idea, this identitary and epistemological endeavour reverberates in his above-mentioned idea about culture as rendition, in Derrida’s terms, as a rendition of the différance. But the unveiling of the identity is limited by the self-constraint, by “the granitic layer of the spiritual fate”, by the “predeterminate” answers to the questions, by the “immutable” “this is me”, and also by its “convictions”, as everything sums up to the “untouchable right from the depths of the soul”. The study means “to learn in order to find how”. The self is constructed, it is made up; it is a learned structure that functions in order to limit the additional learning/study. Therefore, the criticism of this limitation offers an evasion theory. Bateson believes it necessary to make a change in the premise of the learning/study, a deconstruction of its own codes and constraints – in Derrida’s terms –, and, consequently, in Nietzsche’s terms, a transformation of the individual, together with a new freedom.

Mass media try the annihilation of this transforming process, by using the simple type of alienation: it creates fake images, and trivial celebrities with trivial ideals. Hence, the working class forgets its difficulties, forgets its hunger and buys the deeply desired anaesthetic that helps people to get along with life. It is a kind of “resistance through media”, in a sad and suppressive context. The learning process is irrevocably annihilated.

Repression as a conscious and voluntary psychological process, consisting of giving up the fulfillment of a desire which is not in full accord with the moral being, leads to the annihilation and alienation of the simplest desires and rebellions.

Repression means to live a life you shouldn’t have lived, to do things you have never wanted to do, to be what you are not. Repression is self-destruction. It is suicide – of course, slow, but sure; it is a gradual poisoning. Expression means life, repression means suicide.

A simple analysis of the ideas above (with the moderation de rigueur) may suggest clues for the future direction of research.

Here rises the interest for the investigations performed by Lopez and Stohl and their conclusions. Their pertinent and scientific arguments show that the export-oriented industrial policies generate considerable economical growth. Still, as the two sociologists’ analyses illustrate, they don’t seem to generate democracy or non-authoritarian rules. On the contrary, they create further support for a repressive state. The contemporary economic policies generate terrifying human costs. I don’t think the world leaders’ presentations and their explanations on the necessary human costs can be ever accepted. We can do more; we can do better without these overwhelming human costs.

The main apprehension is now the model of a new international division of labour. This concept has apparently been borrowed by the capitalist leaders from the old socialists, and it is actually hiding something even harsher, something that will bring forth the strengthening of the state as instrument of repression. The new international division of labour is a more important issue to discuss than others, because it is, perhaps, the most important cause of both the political and the civil repression.

On the other hand, if we examine carefully the present legal system, it is reveal itself as a revolting system, supporting the class exploitation, the radicalization of the chasm among social classes and the supremacy of the white heteronormative and macho-patriarchal majority. The legal system supports the creation of the political obedience and it deals with the adjustment of the value of work. Actually, it protects the capital creation and a type of legal inequity.

Truly, this is what we are talking about. The capitalist state was born as a violent one, from the slave trade and the bloodstained fights against the organized workers up to the militarized ghettos from the 2000’s South America or the Iranian government’s bloody reprisals against its own citizens.

Capitalism was born as a violent system, and this is an element belonging to the genetic code of its ideology. Here we can endorse Gržinić’s idea that in fact the neoliberal global system should be read as the dark side of the communism, and not vice versa. In this time of the neoliberal global capitalism we actually face something what we, “the Eastern Europeans”, have already tested on ourselves during the communism. Gržinić is completed by Leban: “Contemporaneity is thus marked by the strategy of extermination and regulation of life that is being reproduced and artificially maintained by the neoliberal global hegemony, and that, as a consequence, form extreme living and environmental condition”.

In order to understand the main effects of the state violence, we also have to consider the alternative: the social assistance for the poor and for the working class. Frances Fox-Piven and Richard Cloward wrote in New Class War: “the connection between the income maintenance programs, the labour market and profits is indirect, but not complicated”. Too much social democracy will make people stop being grateful for low wages and poor work conditions. Thus, even with the converse, the link between state repression, labour market and profits is not complicated at all.

Repression manages poverty. Poverty depresses wages. Low wages increase the rate of exploitation and create profit. Which is the main purpose of the state.

Gržinić, Marina – “From Transitional Postsocialist Spaces to Neoliberal Global Capitalism”, in Pavilion - journal for politics and culture, Bucharest, no. 12, 2008.

Leban, Sebastjan – “Rethinking the Future: Politics of Extermination”, in Reartikulacija no. 6, Ljubljana, 2009.

White, Daniel R. and Hellerick, Gert – Nietzsche at the Mall: Deconstructing the Consumer,www.CTheory.net, 1994.

Răzvan Ion is a theoretician, curator, cultural manager and political activist. He is the co-editor of PAVILION – journal for politics and culture, co-director of the BUCHAREST BIENNALE – Bucharest International Biennial for Contemporary Art (with Eugen Rădescu), and between 2008 - 2014 was the director of PAVILION – the center for contemporary art and culture in Bucharest. He was associate professor at University of California, Berkeley; Lisbon University; Central University of New York; University of London; Sofia University; University of Kiev; etc. He has held conferences and lectures at different art institutions like Witte de With, Rotterdam; Kunsthalle Vienna; Art in General, New York; rum46, Aarhus; Calouste Gulbenkian, Lisbon; la Casa Encedida, Madrid; New Langton, San Francisco; CCA, Tbilisi; Babes-Bolyai University, Cluj; University of Art, Cluj; etc. He writes for different publications and he recently curated ’From Contemplating to Constructing Situations’ and “Exploring the Return of Repression” at PAVILION, Bucharest and rum46, Aarhus. Presently, he is working on the book projects “Exploring the Return of Repression” and “Rhizomic Structures Of Art Institutions. Neo-Politics Of Culture”. His future curatorial projects includes “The Affluence of the Working Class from Differentiation to Colectivism” which deals with the concept of fashion from the perspective of anarchism, activism and social-political movements. He is a professor at the University of Bucharest where he teaches Curatorial Studies and Critical Thinking.(www.pavilionjournal.org; www.bucharestbiennale.org; www.pavilioncenter.ro)